Digital transformation is more than just an industry buzzword that came up in recent years. It is happening, and it's showing no signs of slowing down[1]. Companies and entrepreneurs that don't keep up with the growing trends of digital transformation find it difficult to stay relevant and competitive in dynamic markets. 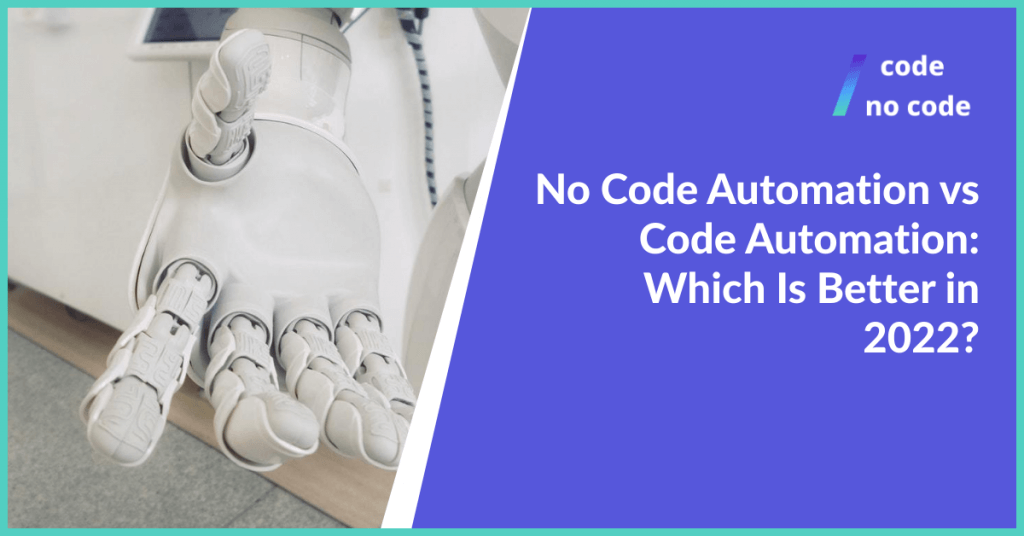 To that end, businesses have had to introduce custom apps that help to deliver business requirements, grow customer interactions, revenue and enhance their digital presence. But before now, developing custom apps was a feat for industry giants with sizable budgets and large and efficient IT teams.

Today, the task of software development has extended to small business users, marketers, customer success teams, and the likes - all generally termed "Citizen Developers". The conveyors of that extension in the development world are Low Code and No Code platforms.

As opposed to traditional software development, Low Code/No Code tools do not necessarily involve writing code at all. Instead, non technical users can create apps with advanced features that meet the set business objectives using a drag and drop interface.

The result of both No Code/Low Code automation and code automation are essentially the same - functional software solutions to further digital transformation.

This begs the question of which approach you should use. Can No Code and Low Code solutions live up to the hype? How do Low Code/No code solutions and traditional coding stack up against each other in different instances?

We will be answering these questions and succinctly examining both approaches throughout this article. In the end, you should be able to make a well-informed decision on which development approach is better for you.

You can think of traditional development in terms of building a house, for instance. The house building process roughly consists of working with architects to determine an architectural design, hiring a construction company, extensive cost analysis, and you overseeing the project.

In summary, traditional development is full of a lot of manual processes that ultimately cost a lot of money and take time.

On the other hand, there's the option of purchasing a prefabricated house or making slight customizations to an already existing housing development. Likewise, you can use Low Code/No Code automation tools, which use visual drag and drop features, to create applications with powerful features.

Perhaps unsurprisingly, Low Code history showed that these tools were created as an auxiliary for professional developers to create software solutions all in one platform.

It used pre-made templates and user-friendly drag and drop design tools to help professionals deliver and scale apps faster. Even Integrating with third-party apps and services was easy to do and as a bonus, you get to execute the whole software creation process from design and development to deployment and maintenance, all in one workplace.

Low Code platforms give you access to fine-tune the pre-made blocks to exact specifications.

Most Low Code platforms are best suited for businesses with small in-house IT teams constituent of experienced developers or citizen developers with succinct coding skills.

The No Code movement seemed to address the concerns on the global shortage of software developers by proposing that anyone – citizen developers – can create web and mobile applications.

As the name implies, No Code tools require no coding skills whatsoever. All that is needed during No Code development is to drag and drop elements on a blank canvas or pre-made template. The business logic is written in basic English or other supported languages and other specifications are easy to do with selections and imports. For more information on the topic, you can look at what is No Code.

As opposed to Low Code platforms where hiring developers was the only way to get the best service; citizen developers can derive the best from the best No Code tools without any coding skills.

That being said, how do these new tools stack up against the conventional method of software development? Let's compare!

With a rough idea of both approaches, we can now compare which is better in several categories; Full Code or Low Code/No Code development.

But there's another side to the story. Indeed writing code from scratch means that every single detail is defined by the developer or IT team, but what that creates is an overdependence on the developers.

No matter how small a change is to be made, you need the involvement of programmers. This can burden IT teams in markets with dynamically changing demands.

Full code is a painstaking process. Writing complex code for custom functionalities and details is burdensome for developers. It's no wonder hiring developers costs so much.

Using Low Code/No Code automation platforms enables users themselves to create custom applications. At most, a small team of professional developers or dedicated citizen developers would do the trick for a startup.

Most No Code platforms and Low Code platforms provide a free version where you can create automated workflows, create and test apps until you're ready to deploy them. Only then would you need to pay subscription fees or upgrade plans on such tools.

Developing with No Code/Low Code platforms is obviously easier than developing using traditional coding. However, when it comes to creating very complex business applications with specific functionality, you may have to do things the hard way.

One of the biggest strong points of traditional development is that there is no level of possible complex functionality that cannot be coded up.

However, there is a substantial amount of hearsay in this regard as it concerns Low Code/No Code software. Many business users have been coerced to believe that Low Code software can only be simple.

Meanwhile, there are a number of No Code and Low Code platforms that make delivering complex enterprise grade apps easy. Nevertheless, Low Code/No Code solutions will more than likely have a relatively limited capacity in developing complex apps in comparison with traditional coding.

The digital market is constantly evolving and business demand and conditions keep changing. What’s more, business users have to assume that competitors will be able to keep up with this rapidly changing market in order to move the business forward.

In order to keep up with such dynamic markets, business users need to respond to business requirements quickly and efficiently. No Code and Low Code tools champion this category.

With Low Code/No Code tools, you can accelerate business processes with automated workflows and build business apps without bothering about delays and debugging setbacks.

KPMG [2]made some discoveries further buttress the higher status of Low Code and No Code software as opposed to software projects using the conventional route. Up to 80% of software projects get delayed before deployment which is too much for both startups and existing businesses.

No specific Low Code/No Code tool works independently of other external systems; neither does traditional development. However, the better approach in regards to integration comes down to the previous category -time.

It takes less time to integrate Low Code and No Code software with other systems since it uses pre-built plugins and adapters.

It’s quite difficult for a Low Code or No Code tool to be considered entirely stable. Take for instance the Google App Maker No Code platform that suddenly decided to discontinue the product.

In that regard, traditional development is to ascertain that software built with a Low Code/No Code tool is entirely safe. Since most of the development uses pre-made templates and plugins, It's possible for the citizen developers to create vulnerabilities that they themselves are oblivious to.

Most Low Code/No Code tools offer permission and access control features to determine citizen developer roles and external access. But even this can't be compared with the stability and security offered by traditional development.

Meanwhile, there are certain certifications such as ISO 27001 and SOC2 Type 2 you should look out for. Their presence ascertains the security of a No Code/Low Code tool based on industry standards.

However, in this category, traditional development methods have an edge over Low Code/No Code automation tools.

Not only can the IT team implement specific security architecture, but they also have full control over the code. The only downside is the developer has to go back to the code to fix any security issues, whereas, for a No Code/Low Code tool, updates and patches are automatically installed.

Low Code/ No Code Platform vs Full Code: Use Cases

Since we now have a solid grasp on how No Code/Low code tools stack up against traditional development, we should also look at when to use each of these technologies.

If your business or startup requires or is going through these conditions then a Low Code/No Code Platform is probably the way to go:

Of course, as we've previously concluded, there are many Low Code and No Code tools that can create complex applications. But when it comes to simple web apps and the likes, Low Code/No Code platforms have no competition.

Use the traditional development approach if your startup or business meets the following conditions:

Choosing between Low Code/No Code automation and traditional Code automation should be easier with all the information you now have. However, one possibility we haven't yet discussed is the combination of both approaches.

Of course, using solely one path or the other instead is not especially better or worse. It all just depends on your requirements.