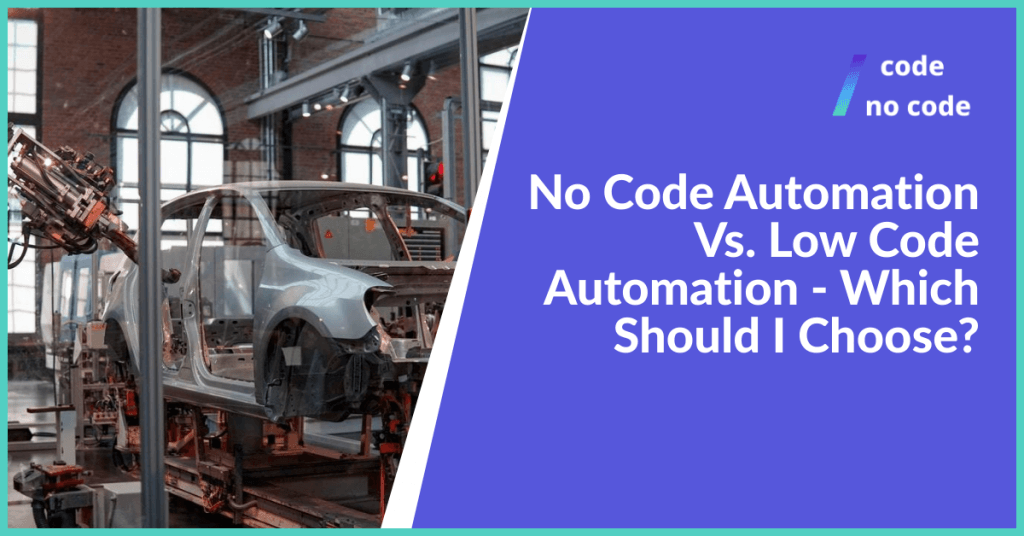 Critics of No Code automation argue that coding-based automation produces better results because it leads to more structured and organized software.

Ultimately, the choice between using No code automation vs. low code automation debate comes down to personal preference. Some people prefer the creativity that No Code automation allows, while others prefer the more structured and organized results that coding-based automation produces. There is no right or wrong answer – it is up to each individual user to decide which tool works best for them.

This article explains everything you need to know about automation, the benefits, and the risks involved in the automation procedures. In the end, you should be able to figure out which of the two is best for your business.

In web development, automation involves using already-built methods to build websites, applications, or software. As a result, human input in these systems is reduced to the most minimal that is possible.

Automation technology runs on a programmed system, controlling all commands and feedback. The control ensures that the execution of instructions carries on without human intervention. The resultant system is automatic; it can run on its own.

What Is No Code Automation?

Not every developer, especially citizen developers, has the luxury of time to code or even knows how to code. Therefore, the development of building mobile applications without the traditional hand-coding became a necessity. This gave birth to the theory of No Code automation.

No Code Automation is a coding technique that permits all kinds of software developers - professional and citizen developers to automate business processes through a visual graphic interface rather than hand-coding.

The graphic interface uses powerful features such as the drag and drop feature, imitating a personal user interface. Using No Code automation platforms for software development erases the need for prior programming knowledge. They speed up the automation process.

The use of No Code platforms is, in fact, a blessing. Business users can develop programs without depending on experienced professionals to write code. No code automation platforms are easy to use. They save time, money, and other resources for medium businesses. Also, professional developers can concentrate better on demanding tasks.

What Is Low Code Automation?

Low Code platforms use minimal code to function. The features of the automation process are visual modules, drag and drop features and graphic interfaces, and so on so that developers can automate processes real quick and with less code.

The developer requires knowledge of coding when performing interactions using Low Code platforms. Where a developer with coding knowledge is absent, anyone who understands coding can help out.

The key differences between Low Code and No Code automation platforms include:

Benefits of No Code Automation

The advantages of using No Code automation platforms are:

No code platforms provide the opportunity for anyone without knowledge of coding to create applications themselves. Organizations that use the resources available can create their applications without hiring anyone to automate their businesses.

No Code development platforms ensure all devices and user interfaces support and provide similar experiences. There is no complexity involved, as all necessary resources are available in the software. In addition, No Code tools reduce complications when building workflow.

No code tools simplify the integration of businesses with other programs or ventures. Using No code platforms integrates the whole workflow in little time. In addition, No Code automation platforms have built-in options to simplify your workflow or automation task.

Software development is transiting into one where we can depend on No Code platforms to do an excellent job. However, using Low Code tools improves the result. The reasons why you should include minimal code in automation[3] processes include:

You Get Accurate Results

When you automate using codes, you improve the accuracy of the development program. With Low Code platforms, you build the software to your desire. Also, the code helps you to make changes when the result is not the result in mind.

The outlook of all software gives an exact view of the kind of code used to develop it. Using Low Code platforms improves the uniqueness, as developers can design specialized programs with these tools.

The use of code automation encourages users to display their creativity. It allows for discoveries and innovations, giving rise to more unique applications.

When Do You Use Low Code or No Code Automation?

Though both automation processes are useful, the benefits are use-dependent. As a developer, you need the right processes that deliver and are worth your investment. Hence, you need to know the right code platforms to use at every point.

You can use No Code development platforms when the test cases you want to automate do not connect to any code. This condition is fundamental to using No Code platforms. No code automation platforms will work when deployed for a similar automation process, and it was successful.

No code automation process is a good option when the project you want to automate works on consistent data.

Best No Code Tools for Automation

Some of the best No Code tools include:

Some of the best Low Code tools or platforms you can try include:

In the business world, time is money. And when it comes to automation, the saying goes that No Code is better than bad code.

Unfortunately, bad codes can take longer to write and maintain, be more error-prone, and slow down your website or application. This is why so many businesses are turning to No Code automation tools to speed up their workflow and get products out the door faster.

But not all No Code automation tools are created equal. Some are easier to use than others, some offer more features, and some are just better quality. So how do you know which one is right for you?

First of all, consider what types of tasks you want to automate. There's a wide range of No Code automation tools available, each with its strengths and weaknesses.

If you just need to automate simple tasks like sending out emails or managing your social media accounts, a tool like Make or N8N will likely suffice. But if you need to do something more complex, like building a chatbot or an entire website, you'll need a more powerful tool like Webflow or Bubble.

Finally, consider the price. No code automation tools can range from free to thousands of dollars per month. If you only need to automate a few simple tasks, you can probably get by with a free or low-cost tool.

But if you need to automate complex tasks, you'll likely need to shell out for a more expensive tool. So there you have it: three things to consider when choosing a No Code tool. Just remember to consider your needs carefully before making your decision. You can save time and money while getting your work done faster and more efficiently with the right tool.

No code automation tools can help businesses speed up their workflow, get products out the door faster, and save time and money. But not all No Code automation tools are created equal. Some are easier to use than others, some offer more features, and some are just plain better quality.

Moral of the Story

No code tools are essential for automating repetitive tasks in any business or organization. But not all No Code automation tools are created equal, so do your research and make sure that you choose one that meets all of your requirements. By doing so, you can speed up your workflow, get products out the door faster, and save time and money in the long run.

In the end, the choice of the automation processes you use lies in your business needs.

Whatever tool you end up with, make sure it solves all the problems you need to automate in your business. Then, explore your options and tag along with the best choice for you.